You are visiting: Home » Decorating/DIY » Paint Your Walls » My Two Screams

Tom likes to joke that I have two very distinct panicked screams.  The first one is high-pitched, sort of like “AAAAAHHHHHHH!”, and generally alerts him to a spider within my vicinity.  The other is lower in tone and barely audible, with a sound kind of like “Uuuuuuuuuuhhhhhhhhh!”  This one actually means that I’m in imminent danger and there is an emergency situation in progress.  Danger, Will Robinson!

I didn’t ever sound my emergency scream until we had been married for about 8 months.  At the time, we had just bought our first home and were in the progress of painting over the tri-purple master bedroom.  Being new painters, we decided that there just had to be a better way to paint than using painter’s tape, a roller and an angled brush for cutting in.  A visit to Lowe’s revealed that there were all sorts of gadgets and gizmos available for painting, so we thought we’d give them a shot.

We bought two of the paint rollers that hold the paint within the roller handle. It’s really a brilliant idea, because these type of paint applicators mean that you don’t need a paint tray, reducing the mess created when you paint.

Tom’s paint roller worked great.  He was trucking along priming that bright purple room in no time flat.  I, on the other hand, had problems.  The paint in my roller wouldn’t feed from the handle into the roller.  I followed all of the troubleshooting instructions and still couldn’t get it to work.  Frustrated, I pushed the paint into the stick as hard as I could.

Much like looking down the barrel of a loaded gun, the fill valve of the paint stick was pointed towards my face.  When I forced the paint into the stick it didn’t feed into the roller.  Instead, it squired out of the fill valve – under a lot of pressure – and directly into my eye.

Hearing the weird emergency scream for the first time, Tom came running in panic.  He pushed me into our shower, still wearing my shoes and all, and flushed the paint out of my eye.  It REALLY hurt, so I’m sure the crying helped to flush my eye, too.

Once I calmed down, Tom banned all paint gadgets and gizmos from our house.  We’d paint the way the professionals do and avoid the risk to our eyesight.

So, you can imagine his reaction when he saw this appear in our home a few weeks ago. As soon as he saw the boxes, he said, “Lindsay, no way.”  You know he was serious because he called me Lindsay, instead of his usual “LT” (my initials before we were married).

I have been wanting to paint the ceiling in our dining room “Lindsay White” for ages, since we left it builder’s beige when we painted that room years ago.  I told Tom that I had become a DIY guru in the almost nine years that had passed since the first time I used a paint stick and that I could be trusted.  I also said that I remembered how to flush my eyes, just in case.  He reluctantly agreed to let me use them while he was at work, but I think I heard him mumble something like, “Remember, no one will be here to hear your weird scream.”  I just ignored it.

I began by taping off the ceiling with some plastic sheeting that comes attached to a roll of painter’s tape.  I do a little product testing for an industrial tape company that’s looking into coming into the consumer market, so I was thrilled to get to cover my walls so easily. Then, I broke out the Homeright PaintSticks.  Man, paint sticks have come a long way, baby.  These were incredibly easy to fill, and the paint flowed from the handle into the roller like butter.  They also weren’t heavy at all, so I didn’t have an aching back when I was finished rolling my ceiling like I normally do. Homeright sent me two different applicators – the original PaintStick and what I assume is the new and improved version, the PaintStick E-Z Twist.  I used the original version to prime my ceilings and was relatively happy with the way it worked.  My only complaint was the the stick was about 3 or 4 inches too short for me to comfortably reach my ceiling (for reference, I’m 5’8″ tall and my ceilings are 9′ tall), so I had to stand on a step stool.  It wasn’t a deal breaker per se, but it was kind of a pain.

For the paint coats themselves, I used the E-Z Twist version.  This PaintStick has a handle that you twist, which helps feed the paint more easily into the roller.  It’s also about 7 or 8 inches longer than the original version, so I didn’t have to use a step stool to paint the ceiling.  Paint usually goes on a lot faster for me than primer, but this time it was like hyperspeed.  It probably took me an hour to prime the ceiling and only 20 minutes for each of my two paint coats.  Clean up was also much easier than I expected.

Because I was alone for the process, I couldn’t capture a photo of me actually painting.  So, just imagine me as the PaintStick box girl…except I have bangs and was wearing a ponytail and old paint covered clothes.

Long term, my only worry is about the perforated roller covers needed for the PaintSticks – you can’t use regular roller covers because the paint won’t be able to push from the roller cage into the cover with the perforation.  I usually use a new roller cover for each coat when I paint.  These covers cost about $6/piece at Lowe’s.  I normally pay about $11 for 3 Purdy White Dove rollers (my favorites), so the perforated rollers cost a little more.  But, since painting with the E-Z Twist is so much faster than using a regular roller, I guess I can get over the couple of bucks difference, right?

Here’s an old before picture with the builder’s beige ceiling: And an after with the white ceiling: It’s so much lighter and brighter in there now!  I didn’t think that the difference in white and beige would be a huge difference, but it really is noticeable.  We have to keep our curtains closed most of the time since our dogs bark at every single person/animal/leaf they see outside, so just this little change in ceiling color as made it feel less cavelike in the dining room.

Tom was excited to come home and find out that I still had both my eyes.  And I was excited that I didn’t make a single mess or have a single spill when I was painting the ceiling.  Win-win!  I’ll certainly be using the E-Z Twist Paint Stick for other ceilings – and walls, too.

And, hooray for no weird emergency screams!

Other projects from my dining room that may interest you: 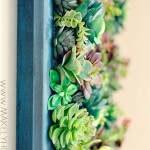 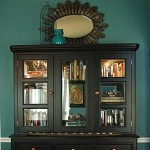 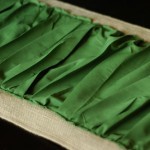 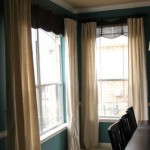 Valence Made from Bamboo Placemats

« Jeff Lewis is My BFF
The Paint Colors in My Home »